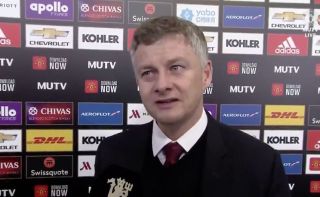 There will be a lot of people calling for Ole Gunnar Solskjaer’s head tonight.

The performance and result at Old Trafford against Manchester City was unacceptable.

We were lucky to be just three goals behind at half-time and the Manchester United manager said as much in his post-match interview on MUTV.

I’ll admit during the game and at full-time, I was fuming with Solskjaer. We were at a disadvantage from kick-off with the team selection and tactics which is inexcusable for a football manager at this level.

Now I’m just beginning to feel sorry for him. Solskjaer’s got his heart in the right place but he is completely out of his depth.

Speaking to MUTV, Solskjaer explains his half-time message and how he told the players to go out and win the second-half.

What else could he say? His pre-match briefing either didn’t get across to the players or it was too basic to get the better of Pep Guardiola.

You can’t win games solely on belief. Solskjaer talks about demanding a response from his player after falling behind, but it would be nice to see his team be proactive and win games after taking the lead. Let’s not forget they struggle to do that too.