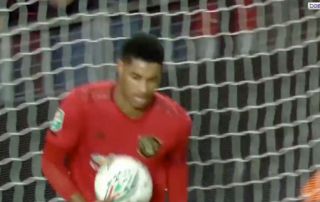 Marcus Rashford has pulled one back at Old Trafford with the scoreline now 3-1 in Manchester City’s favour.

A disastrous first-half saw City lead by three goals at the interval.

Bernardo Silva scored a screamer for the opening goal before Riyad Mahrez made it two. Then Andreas Pereira was unlucky to put the ball into his own net as Man Utd found themselves three goals behind at home.

But United have got one back against their rivals. A well-worked goal finished off by Marcus Rashford, who Ole Gunnar Solskjaer has made captain for the night.

Surely it’s too late for a comeback?

A lifeline for Manchester United! 🔺