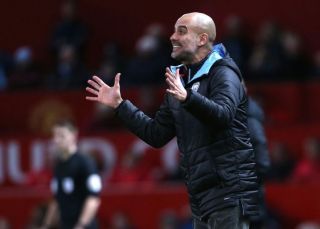 Sure, rub our noses in it. Give us an inch of false hope so that crashing out of the League Cup hurts a little more.

Pep Guardiola has not said anything out of the ordinary by suggesting Manchester United are still in the tie, despite losing to his Manchester City side 3-1 at Old Trafford.

It means Man Utd go into the second-leg with a two-goal deficit and it goes without saying that we’ve no hope of clawing our way back into the game if we perform how we did tonight!

United were lucky to be trailing by just three goals at half-time, which is unacceptable against one of our fiercest rivals., but a second half goal saw City close the game out by keeping the ball.

Guardiola notes how the Red Devils changed their shape in the second half and says we’re still in the tie… because it’s United!

“It was an outstanding goal from Bernardo, we played really good,” he told Sky Sports (via Manchester Evening News).

“Second-half they changed shape and we started a little more to keep the ball. Good result, but it is not over because it is United.”

Guardiola & Solskjaer: This tie is not over #MCFC #MUFC pic.twitter.com/qeD7erZmkg

Can’t say we have much hope for the second-leg right now, but that won’t stop us building hope between now and then.

That’s just part of being a football fan.