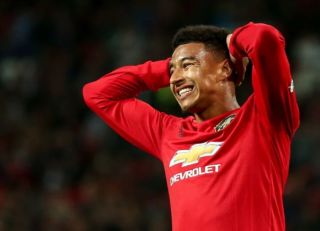 Manchester United were losing 3-0 at half-time when manager Ole Gunnar Solskjaer decided to make a decision.

The Norwegian decided to haul off Jesse Lingard and bring on Nemanja Matic after watching his team get absolutely battered in the first-half.

Man Utd fans are said to have reacted with cheers when it was announced that Lingard would be replaced, as reported by Manchester Evening News reporter Samuel Luckhurst.

Some United fans cheering as it’s announced Lingard has
been subbed. #mufc

It’s been a disgraceful performance for the Red Devils and we can’t see a way back into the game from the three goal deficit.

Solskjaer is likely to take quite a bit of stick after the match, which even he should acknowledge is to be expected when you are manager of the biggest club in the world and getting hammered by your arch rivals.

Lingard performed poorly — like he’s done for the past 12 months.

The decision not the start Matic was a baffling one given United were without their best defender, Harry Maguire, and had no other choice but to start Phil Jones in defence.

Matic would have offered more protection at the back from midfield but Solskjaer, for some unknown reason, thought he could go toe-to-toe with Pep Guardiola’s side and it has backfired.

It looks like it’s going to be a long night in Manchester.