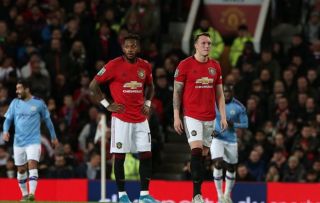 It’s unacceptable to be losing 3-0 against that lot at half-time and Marcus Rashford’s second half goal was only a mere consolation.

We don’t know where to start when it comes to dissecting the game but loads of Man Utd fans have taken to Twitter to show their sheer disappointment with the team.

As you can see from the link above, the Old Trafford faithful weren’t happy at the interval with Jesse Lingard’s performance. He wasn’t alone in the bad performers list — which is too long to write out. And it would be depressing to spend the night doing so.

Coming back from a two-goal deficit at The Etihad will be a difficult task. One you have to say is probably beyond the current player and squad.

Below are some reactions from our friends on Twitter. It makes for sorry reading but you won’t find any happy United fans tonight.

The absolute craziest thing about this match is, City weren’t even exceptional. Made us look like cones for 45 minutes and got complacent in the 2nd half. He simply just needs to accept he’s inept, jobs to big for him and the entirety of that coaching staff needs binning.

WE WON THE SECOND HALF!!

So yeah, you slice them vegetables and keep them in a separate container. pic.twitter.com/JFuyA9iGaW

That needs to be Phil Jones’ last Manchester United appearance.

Tuanzebe, Williams, Gomes and Greenwood. Get them in the side until the end of the season and let them develop rather than losing with so-called senior players.

Well the good news is that game has finally finished. The bad news? There’s another leg, away, at the Ethiad. Gulp.

Do em on the concourse lads. Goodnight #shite⚽🇾🇪

A shining light is a shower of shit.

Not only can he play, he’d kill a City player given half a chance.

My kind of full back.

Matic came on and settled things down, although a fair amount of that was down to City easing off. Either way, good sub. Lingard dropping another unqualified stinker.

Guardiola and Mourinho lost to Solskjaer immediately after Pochettino was sacked because Ole’s a clown and they didn’t want Man Utd to make the move.

Now that we’re a week into January, Pep knows Man Utd won’t have time to back Poch even if they get him. Absolute destruction. pic.twitter.com/Zjy1g5LjFV