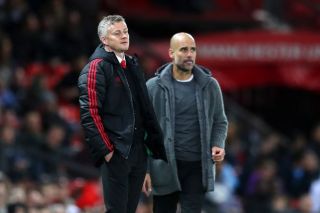 Our rivals come to Old Trafford looking to take advantage from the two-legged fixture with a place in the final up for grabs.

Beating City will give Solskjaer a golden opportunity to win his first piece of silverware as Manchester United manager.

READ MORE: Cesc Fabregas names the iconic Man Utd match we all wish we had played in

🗞 Here it is… the #MUFC starting XI to face City in our #CarabaoCup semi-final first leg!

Harry Maguire misses the game after picking up a knock against Wolves on Saturday. He is replaced by Phil Jones, who is joined by Victor Lindelof, Aaron Wan-Bissaka and Brandon Williams in defence.

The midfield looks like with Fred, Andreas Pereira and Jesse Lingard pushed further on.

Up front we’ve got Daniel James, Mason Greenwood and captain for the night Marcus Rashford.