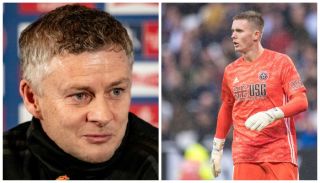 Ole Gunnar Solskjaer is reportedly keen for young goalkeeper Dean Henderson to return to the club to put pressure on David de Gea.

It’s not been the best twelve months or so for Spanish Dave, but we’re still of the view that he’s going through a blip rather than decline. Some of his mistakes have proved costly and the club has recruited a new goalkeeping coach from Burnley to help get him back to his best.

Henderson, by some contrast, has shone on loan at Sheffield United. First in the Championship last season and now in the Premier League following their promotion to the top flight — aided by Henderson’s presence between the posts.

According to The Athletic, this could see the 22-year-old earn a key role to play at Man Utd, as his form has impressed everyone including Solskjaer and it’s felt he could put pressure on De Gea.

Sergio Romero is currently second choice keeper at United and you’ll find it difficult to find a club in the league with a better backup option for their first choice shot stopper.

Henderson looks an amazing prospect and it won’t be long before De Gea is looking over his shoulder.

Competition for positions is a good complaint to have!

We’ll be keeping a close eye on Henderson’s progression throughout the remainder of the season.