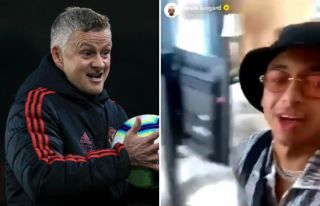 Most of us use social media and it can be difficult to get away from it.

Nowadays it’s everywhere and at Stretty News we can see the positives and negatives of actively being online.

We predominantly use Twitter to keep up with Manchester United-related news. Sometimes people send us new stories so that we can jump to them quicker than other blogs and it doesn’t go unappreciated.

Then there are times we hate Twitter as it gives keyboard warriors a platform to post content anonymously. Sometimes we’re even infuriated about how United players come across on there, especially when they don’t back up their big persona on the pitch.

On the other hand, Instagram is another tool to keep track of what the footballers are getting up to on and off the pitch.

But today Ole Gunnar Solskjaer was asked about his players being on social media and he gave an interesting response.

The Man Utd boss admits talking to his players about how they portray themselves online.

“It’s part of being a Manchester United player, how you come across and it’s important that you do give up yourself in a positive way and it’s football-related,” Solskjaer said (via Manchester Evening News). “I do speak to players about how they portray themselves. I don’t have these social media thing but it’s a different generation.”

Paul Pogba and Jesse Lingard are two United players renowned for their activity on social media.