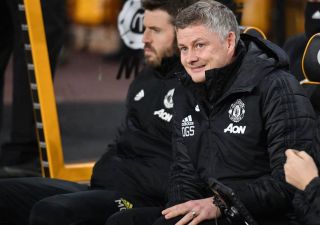 After a jam-packed weekend of FA Cup action Manchester United fans have a Carabao Cup semi-final to look forward to with a month-watering clash with rivals Man City on Tuesday night.

The semi-final first leg will see both Manchester teams go head-to-head at Old Trafford — with a final at Wembley at stake.

It’s a competition Ole Gunnar Solskjaer could do with winning this season. There’s been a lot said about the manager being out of his depth and winning some silverware would be a step in the right direction, and probably buy him more time in the hotseat.

He had beaten Pep Guardiola’s side already this season, against the odds, as an unpredictable United team gained the local bragging rights with a victory at the Etihad last month.

With that in mind we take a look at who we think with start for Manchester United in the derby match.

Sergio Romero (GK) – Solskjaer has tended to rotate his goalkeepers in the cup competitions and you can expect him to carry on here. Romero is the best backup goalie in England so we’ve no concerns over the Argentine starting against City.

Aaron Wan-Bissaka (RB) – Best right-back at the club. Aged 22, Solskjaer shouldn’t worry too much about burning him out. I understand giving a fringe player or two minutes in this game as it’s the League Cup, but we’re playing City and Solskjaer needs to reach the final and win it.

Victor Lindelof (CB) – We are waiting on a late fitness test to know whether Harry Maguire will feature tonight, so there could be extra responsibility on Lindelof to lead from the back tomorrow night. Hopefully his partner doesn’t ask too much of him…

Phil Jones (CB) – Maguire’s injury has led to this. I won’t ever get over naming Jones in a predicted XI for a Manchester Derby of all games!

Brandon Williams (LB) – He may lack experience but this is where he’ll earn it. Williams is currently our best option at left-back and there’s also a bit of bite about his game. He’s ready.

Nemanja Matic (CDM) – We haven’t got many options in this role. Scott McTominay would start the game if he was fit, but unfortunately that’s not the case for this tie — or even the second leg. I feel his performances get exaggerated negatively and he’s not quite as bad as some like to make out.

Fred (CM) – There’s no doubting his improvements over the past two months. Without McTominay or Paul Pogba, Fred won’t have an easy job tomorrow night.

Andreas Pereira (CM) – Yes, he’s limited and one of the players I’d like to see moved on, but it’s either Pereira or Jesse Lingard, and I know who I’m picking at the moment… Lingard was good against City in the recent league match but at times it’s like we’re playing with 10 men rather than 11.

Mason Greenwood (RF) – Gets the nod over Daniel James because of his finishing. We’ll need to be clinical against City.

Anthony Martial (CF) – Hopefully recovered from his illness and getting back on the scoresheet. And if he does start, fingers crossed it’s not the Martial who sulks for 90 minutes.

Marcus Rashford (LF) – PFA Player of the Month for December. A player we currently rely on.