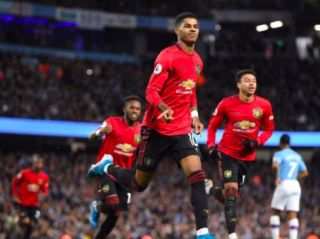 Marcus Rashford has said it ‘means a lot’ to win both the PFA and Manchester United player of the month awards.

The England international was rewarded for his excellent goalscoring form over the festive period.

Rashford started the month brilliantly with a match-winning performance against Tottenham as he netted twice, before scoring a penalty in the derby victory over Manchester City at the Etihad.

He also scored against Newcastle and Burnley in back-to-back wins for the Reds as he brought his goal tally up to 12 in the Premier League.

It seems as though Rashford has found his home on the left-wing under Ole Gunnar Solskjaer. He causes huge problems with his directness on the flank and has vastly improved his finishing this season. We hope he can make it to 20 league goals, which is now realistic after his impressive start to the campaign.

See his reaction to deservedly earning both awards below, as he remains frustrated at not being awarded his headed goal against Aston Villa!

Very proud to win this and grateful to everyone who voted. All eyes on tomorrow let’s go @ManUtd 👊🏿 https://t.co/tsYqjwTAEt

Also grateful to all @ManUtd fans who voted me as the club’s POTM.

Means a lot as it was a better month from us but we know we can still do better 💪🏿 pic.twitter.com/zWgJH2YgNH