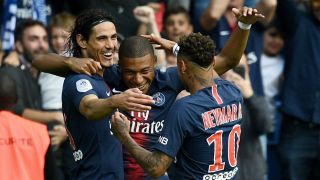 According to L’Equipe (via the Daily Mirror), the Uruguayan is open to a move to Man Utd as long as they’re in the Champions League next season, which is far from guaranteed.

Despite there being lots of speculation over Cavani joining Atletico Madrid, the French outlet claims a deal is not yet done to take the PSG striker to the Spanish capital this January.

The report claims that Atletico Madrid are leading the race to sign the former Napoli frontman on a free transfer with a pre-contract agreement on the table.

Chelsea are also said to be interested in the PSG star’s signature.

That gives United some hope of signing Cavani but if he’s holding out to see if we get Champions League football, it doesn’t sound like he’d join us now.

He is PSG’s all-time leading scorer with 198 goals in 290 games, and those strikes undoubtedly contributed towards Cavani’s haul of five Ligue 1 titles.

At 32, Cavani probably would have preferred to have joined a Premier League club earlier in his career but the opportunity may arise now.

La Liga would offer him something new too!

United don’t only need a goalscorer but more experienced players for the younger lads to take example from.