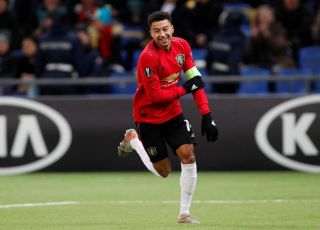 Jesse Lingard will no doubt have fuelled speculation over his future at Manchester United after linking up with controversial agent Mino Raiola.

The 27-year-old’s future has already been the subject of some recent transfer gossip, with a report from the Daily Mirror suggesting he could be offered to Leicester City along with £45m in exchange for James Maddison.

It remains to be seen if that particular offer works, but we won’t hold our breath.

READ MORE: Man Utd players made joke about Daniel James on his first day of training

Leicester are more than likely going to see it as an insult but it could be a starting point for both clubs to negotiate a deal that works best.

Negotiations are going really well with Manchester United with regards to the James Maddison for Cash and Jesse Lingard deal.

We’ve now agreed that we’ll pay them £50m for them to keep Lingard and never contact us again.

Lingard has certainly raised a few eyebrows though, as the Daily Mail states he’s become one of Raiola’s latest clients.

The Dutch-Italian agent is renowned for representing many of the biggest names in world football, and United have had their issues with him in the past.

The Mail’s report points out how United tried to bypass Raiola as they showed an interest in signing Erling Haaland from Red Bull Salzburg this January — but the Norwegian signed for Borussia Dortmund instead.

This could make it harder to keep Lingard at United, but most fans have had enough of the England international’s lack of end product.

Is Raiola that good he could find Lingard a new club?