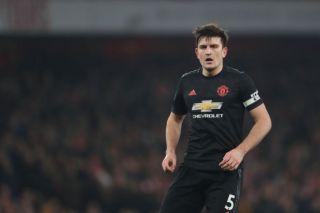 Ole Gunnar Solskjaer has provided the latest on his squad ahead of Tuesday’s Carabao Cup semi-final first leg against Man City.

Manchester United made changes for the FA Cup clash at Wolves which ended in a scoreless draw on Saturday. It appeared as though Harry Maguire as Dutch youngster Tahith Chong sustained knocks during the match, and their availability for the Manchester derby remains unknown.

With fixtures still congested due to next week’s still-to-be-confirmed replay date against Wolves at Old Trafford, Solskjaer must think about the big picture as well as trying to reach the League Cup final by knocking out City.

Jesse Lingard and Anthony Martial missed the FA Cup third round tie due to illness, while Paul Pogba and Scott McTominay are out due to injury. Solskjaer will give as much time as possible to Maguire and the others to prove their fitness before Tuesday’s 8pm kick-off against the Berties.

“It is a bit early yet [with Maguire],” Ole told MUTV (via ManUtd.com).

“We are going to give him as much time as possible. He was hobbling about yesterday but there are still 36 hours to go, so we will just wait with all of them.

“It is not a time to go out on the pitch and do lots of work anyway. We are going to do meetings and recovery work.”

The boss was then asked specifically about Lingard and Martial and said: “We hope that everyone is going to be available but we don’t know, because some recover quicker from illnesses than others. So it is the same answer. We have just got to give them as much time as possible and make a decision on the team in the morning.”

Solskjaer echoed what he told MUTV in his press conference this morning when asked about injuries in the squad, saying (via Manchester Evening News), “Gonna give them as much time as we can, that’s the most correct and honest answer I can give. Some of the are still not ready. If it was a game today not sure they could perform at their best but another 36 hours until I give them the team.”