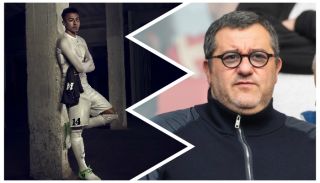 Jesse Lingard has reportedly begun to be represented by Mino Raiola — with has not put Manchester United in a position where they think the midfielder could leave the club.

Raiola is said to be keen to work with more English players and the Daily Mail believe 27-year-old Lingard is part of that strategy.

Furthermore, Man Utd have been linked with move for Leicester City playmaker James Maddison, and the Daily Mirror claims they’ve already offered £45m plus Lingard for the Foxes’ star.

READ MORE: Man Utd players made joke about Daniel James on his first day of training

Raiola represents some of the biggest names in world football, including Lingard’s teammate Paul Pogba. Other United transfers in the past that included Raiola were Zlatan Ibrahimovic and Henrikh Mkihitaryan.

Lingard’s deal is set to expire in 2021 and it looks like he could be moving on to pasture news.

After enduring a horrid 2019, registering zero goals and assists in the Premier League, I don’t think anyone at MUFC will be losing sleep if Lingard leaves.

Off the pitch he’s had his issues and candidly discussed them last month in an interview with the Daily Mail.

We’ve took a quick look at Twitter to see how United fans are reacting to the possible link-up between Lingard and Raiola. These are the best tweets we found:

Absolute scenes when My Pizza Man tricks an Italian club into buying Jesse for 50 mill.

He can have ashley young too

Mini wants to get into fashion..

As much as i love Lingard and hate Raiola, good on Jesse teaming with him as Raiola will push for a decent price and get him a good contract if he leaves

In fact, if all the pundits constantly pursuing loyalty narratives against Pogba aren’t up in arms about Lingard signing on with Raiola AFTER Raiola made the comments critical to United, there’s a clear bias separate from the actions of the player and known facts. #MUFC

Lingard appointing Raiola as his agent after the comments he made on MU is a final nail on his coffin.

Could it get even more embarrassing than it already is at Utd. Lingard has just signed for their head of recruitment raiola. Maybe that’s why they’re trying to offload him to LCFC plus 45mil for Maddison which is yet another embarrassing piss take.

Woke up to the news that Lingard is now working with Raiola. Apparently it will now be tougher to keep him.