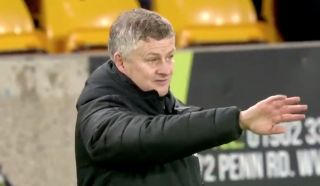 Sometimes you see managers on the sideline giving instructions and for the ordinary football lover it means nothing.

Then other times it can look like the manager in question is having a mare trying to get his message across because nobody in the stadium understands what they’re trying to say.

The pressure on Ole Gunnar Solskjaer is mounting following Manchester United’s 0-0 draw against Wolves in the FA Cup on Sunday.

United were awful at Molineux but we got a fair result from the game — nobody can say either side deserved it more.

The worst part for the Red Devils is how they failed to record a single shot on target.

Solskjaer made several changes to his side, giving starts to Brandon Williams and Tahith Chong, but some supporters are still giving him a rough ride, with increasing calls for his head on social media.

There’s even been a petition titled ‘Get Ole Gunnar Solskjaer out of United’ which has attracted more than 1,000 signatures.

He had a positive impact upon his arrival in 2018 but that 12-match unbeaten streak seems like a ling time ago now.

In the months since, Solskjaer has looked completely out of his depth in the job and more people would be calling for him to be sacked if he wasn’t a club legend.

We look at our rivals — Man City and Liverpool — playing with an identifiable style. United have nothing like that and Solskjaer has been working with these players for over a year.

The camera cut go Solskjaer in the 90th minute and he could be seen gesturing to his players, moving his hand around in a circle motion.

Other gestures follow but we still can’t make out what they could possibly mean.

Clearly telling them to run around in circles with extra passion!

Perhaps it’s clear to the players what Solskjaer wanted. But the results aren’t telling.

Below were some of the reactions to the above video via Twitter:

So his tactics are shouting a players first name and waving his hand around, top quality coaching if you ask me

Composing a musical honestly man has the most senseless hand motions