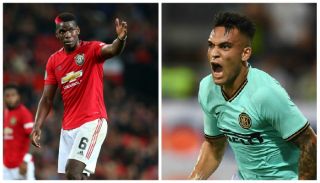 Manchester United midfielder Paul Pogba has reportedly given the green light to a potential transfer to Inter Milan.

The France International is seemingly eager to join the Serie A club over other big clubs as he’s keen to be reunited with former manager Antonio Conte, who he worked with at Juventus.

That’s according to the Daily Mirror and the news comes after Inter made a strong start under Conte this season, as they current sit joint top of Serie A alongside Juve, who have been extremely dominant in Italy’s top division over the last decade.

It can only be a good thing for Italian football to see more competition, so hopefully Inter’s form remains the same between now and the end of the season.

But do they have the funds to pay for Pogba?

The 26-year-old has never been able to settle in Manchester since his return in 2016 and this is also an opportunity to link up with former United teammate Romelu Lukaku.

The Mirror’s report adds that Inter’s interest in Pogba could give United a boost trying to sign Lautaro Martinez.