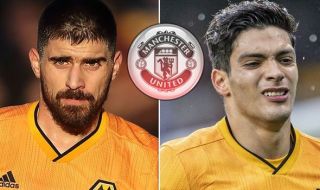 Manchester United have reportedly enquired with Wolves about the availability of Ruben Neves and Raúl Jimenez.

GOAL claim Man Utd have moved to open talks regarding both players as Ole Gunnar Solskjaer looks to add some much-needed class to his inconsistent side that drew with Wolves in Saturday’s FA Cup third round tie.

Solskjaer was questioned about United’s alleged pursuit of the Mexican forward, after the scoreless draw at Molineux.

He admitted Jimenez was a good player.

“Another good player being linked with us,” Solskjaer said as per The Independent.

“He came on and did really well. Loads of players are being linked with us. I can’t comment on speculation.”

But surely Wolves will be reluctant to lose two of their best players midway through the season.

You could see Neves having a positive impact on United’s midfield. He’s got an eye for a pass to unlock defences and that’s what the current side is lacking.

Even with Paul Pogba fit, United look short of a creative spark in the middle and we’ve struggled massively without the Frenchman this season. Pogba has missed approximately three months of action this term and he’s out injured again.

Jimenez would offer something different up front but we can’t see Wolves allowing both leave this month.