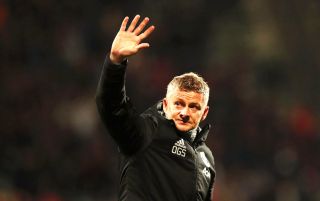 I’ve never been Ole in and I’ve never been Ole out at any stage, I think that’s important to state. I believe that if appointed, a manager or head coach (as most are titled these days) should get the time and support to put their stamp down on their team. The wonderful thing about football is that we all have an opinion on how it should be played. Managers are no different. For a team to be moulded, into a preferred formation, to create a style of play, for players to know their job in defensive, in attack and in transition it takes time. Follow that up with player assessments (that’s not just playing ability, it can also be assessing attitudes and personality) and then also figuring out player partnerships that work and others that don’t throughout team and it’s clear why time is needed.

We get statistics thrown at us before, during and after every match, so we all generally know the win percentages etc. Sunday the 22nd of December a statistic put out there was that Watford hadn’t won a game at home since last April. Hence why they are bottom and have sacked two managers in this 2019/20 season already. The latest statistic that came out after the Watford game was ‘Ole’s Premier League win percentage without penalties as permanent manager: 7%’. Do with that what you will, an oddly timed statistic to put out there. Obviously to highlight the lack of chances created by the team. During the game there was a statistic read out from the Sky Sports commentary team that Manchester United were eleven points off the top four this time last year (match week 17) and only four off the top four this time around, signifying the improvement that Solskjaer had brought to the club. Sometimes statistics don’t show us the full picture. On match week 17 last year Spurs were in the form of their life winning 13/17 matches and Chelsea had only lost two. Their dip in form this year has led to a more inconsistent group of teams outside the top three teams all gathering fewer points therefore closer in points.

Solskjaer had given the fans the assurance that the Manchester United way of playing would be met. Attacking teams, putting them on the back foot and being fearless. While he was caretaker manager this was the case. But after he got the job permanently the high pressing died a quick death. The energy dropped a bit and as a knock on effect United’s weaknesses at the back were exposed on a regular basis. Fresh faces at the back have helped to encourage supporters that those weaknesses can be eradicated. Arguably the best of those new faces has been Brandon Williams whose consistency has been refreshing in a 2019 full of inconsistency.

The worrying aspect of Solskjaer’s year in management has been trying to pinpoint his style of play. For the most part there was concern with no clear way of play being apparent. A high press to start with, then a counter attacking style, then into a possession based game and then a bit of everything in some games. Some would say Solskjaer is merely using his tactical knowledge by adapting his team’s style to combat the opposition’s to gain an advantage in each game. I’m not so sure about that. The best teams let the opposition worry about them and not the other way around. Yes there are times changes need to be made and the shape needs to be adapted. But for the majority of games there is a set style of play. A sign Solskjaer is struggling.

I am not saying he is out of his depth. I am not saying he is not up to the job. I am not saying that he is trying to be too clever. What I am saying is that as hard as you work with a squad on your ideas and style of play, if the players you have are not good enough to do what you ask, plus missing that extra bit of x-factor in a player or two that teams need to challenge then you are going to have a team that will not reach the heights you want to reach. If curiosity killed the cat then inconsistency sacked the manager! Solskjaer is trying everything to come up with the formula to gain consistency. Changing tactics, changing the shape and changing players. It simply will not work! Nothing has changed since he took the job. Players win you games. They also lose you games. He still needs to raise the quality in his squad. There are too many players that just don’t cut it. Winning trophies is about consistency. Lindelöf, Shaw, Matic, Lingard, Young, Jones, Pereira, Mata and Martial are just not producing week in week out. Some are stale and some are players you would have on the bench to support more assured and consistent players. Unfortunately United don’t have those players in the club yet.

The team will go from losing to Watford and fan’s calling for Solskjaer’s head, to winning two in a row versus Newcastle and Burnley and fan’s praising the strike force while pointing towards the start of the turnaround, to losing to Arsenal and repeating the same cycle of reactions that has dominated the clubs season so far. After the two Christmas victories Martial was getting praised from a height about how good a striker his is and how valuable he is to the team. He has only scored 7 Premier League goals this season. The same amount as a struggling Everton’s Richarlison. One less that Burnley’s Chris Wood. And relegation threatened Southampton have Danny Ings on 13 Premier League goals.

The fact is that Manchester United supporters are so desperate to see a return to a consistent run of form that the club enjoyed over the years that they have overreacted to every loss and victory this average team churn up. Lose a game, sack Solskjaer. Win a game or maybe two in a row and the good times are back and certain players are great again. I doubt the January transfer window will bring in enough quality to turn everything around. Even the summer window may not be enough. How much help Solskjaer will get to purchase the players he needs from those above him in is unknown. They have been poor in that regard in recent years.

Overall I feel the manager’s job is safe until the summer bar a disastrous run of form. Is he good enough and has he been doing a good job? Well, he hasn’t proved anything so far is the answer. The squad isn’t good enough to change the inconsistent performances so expect those to remain and test your patience. The players are the players he inherited and that’s what he has had to work with, the majority are average or above average players. I’m not sure he inspires enough to encourage positive performances but also I’m not sure he has the ruthlessness either. There has been no evidence of this so far. Not playing a consistent William’s in place of an inconsistent Shaw is a worry. Consistency should be key to team selection for the most part. To chop and change formations is a worry (although in recent games that has changed). To chop and change style of play from high press to sitting back on your own penalty box is a worry… it fluctuates too often. I would love to see Solskjaer succeed. But the question still remains… Who are Ole Gunnar Solskjaer’s Manchester United? We don’t know!? He just hasn’t put his stamp on the team so far. Either way time will tell. Solskjaer will know that the next two transfer windows will leave him without anymore excuses and will decide his Manchester United future.