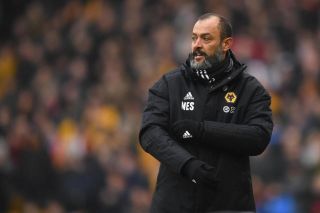 Man Utd failed to book a place in the FA Cup fourth round but at least we’ll have a fair idea who we could face before hosting a replay with Wolves at Old Trafford.

Every man and his dog knows United need more spark in the final third. That was the case again today but it didn’t help that Anthony Martial was ruled out of the game with illness.

Marcus Rashford had to be brought on in the second half but was unable to change the game in United’s favour. Ole Gunnar Solskjaer clearly had one eye on Tuesday night’s Manchester Derby — the semi-final of the League Cup — but he left his side short with the team selection.

There wasn’t enough evidence of effective tactics to turn the game our way, though, and Solskjaer will take some stick for that.

However, with the January transfer window now open, journalists are trying to find out who United will attempt to sign halfway through the season.

Wolves manager Nuno Espirito Santo was asked about links surrounding Jimenez, but doesn’t claim to know anything about the Red Devils being interested, as claimed by BBC Sport reporter Simon Stone.

Nuno on Jimenez ‘link’ with @ManUtd. “First-time I heard it. Ole didn’t mention anything about that. The transfer window is open. When it is open anything can happen. We are delighted to have Raul.”

Update: Solskjaer was asked about Jimenez but would not be drawn on discussing the Wolves player.

OGS on Jimenez: “Another good player we have been linked with. He did really well today. I can’t comment on speculation.”