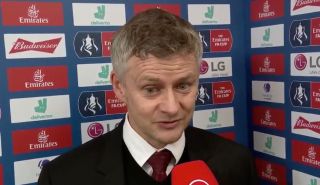 Rather draw and play a replay than be knocked out of the FA Cup!

That’s the message from Manchester United manager Ole Gunnar Solskjaer after today’s 0-0 draw away to Wolves.

The performance itself was most disappointing but Solskjaer singled out Tahith Chong for his display at Molineux, as seen below courtesy of BT Sport:

“An even game, I think a draw is a fair result.”

“I thought Tahith Chong was fantastic tonight, he caused loads of problems.”

Ole Solskjaer singled out one youngster for praise after a 0-0 draw away to Wolves.@DesKellyBTS #EmiratesFACup pic.twitter.com/WGOwyziK8N

Chong was good but hardly amazing. United didn’t do enough in the final third but it didn’t help that Marcus Rashford was on the bench and Anthony Martial had been ruled out of the game with illness.

We’ll have to be much more decisive and clinical on Tuesday night against Man City if we’re to reach the League Cup final.

Solskjaer said they were close to taking off Harry Maguire at half-time but he battled through and could miss Tuesday’s game as a result.

Another underwhelming day as a United supporter!