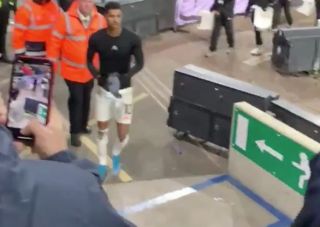 Marcus Rashford came on as a second half substitute against Wolves.

The game ended a scoreless draw but Rashford came close seconds after coming on to the pitch.

His deflected shot hit the bar as Manchester United almost took the lead.

Unfortunately he couldn’t make enough of a difference to win the game to see Man Utd progress to the FA Cup fourth round.

Now we’re forced to play Wolves in a replay at Old Trafford.

But at least one young United fan came away knowing it would be a day he’d never forget.

Rashford took his shirt off after the match before handing it to a kid in the away end.

Fair play to Rashy for the class gesture but we reckon the kid went to the game really wanting a win.