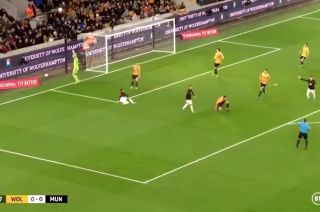 Marcus Rashford has been lively since coming on as a substitute against Wolves.

The Manchester United striker hit the bar with a deflected shot just 10 seconds after coming off the bench.

But he could have had a penalty too, though the referee in question waved play on and it was the correct decision.

The video below shows the incident, courtesy of BT Sport:

This is the attacking intent a Manchester United left back should have! #MUFC pic.twitter.com/ltmI1gN2v8

The same clip shows the attacking intent Brandon Williams brings to the left side.

Although he’s new to the first team setup, he’s without question our best option at left-back.

It looks like United and Wolves will go to a replay at Old Trafford.

The last thing Ole Gunnar Solskjaer needs now is more games with players dropping like flies from injuries and illness.