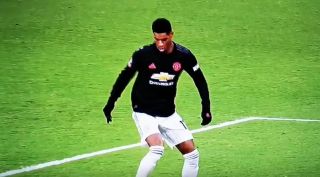 Although the game ended a scoreless draw, Marcus Rashford came within inches of putting Manchester United in the lead against Wolves just seconds after coming on as a substitute.

Rashford replaced Daniel James in the second half but was unable to do enough to give United a win to process to the fourth round of the FA Cup.

The England striker was played in by Andreas Pereira whose heavy pass saw Wolves avoid conceding a goal.

Rashford still got his shot off but defender Conor Coady did enough to deflect his attempt on to the bar.

Watch the clip below, courtesy of BT Sport:

What a block this was from Conor Coady 💪

The Wolves skipper is a big reason why they are still in the #EmiratesFACup! pic.twitter.com/3dKec0HqZV

Rashford is only on the pitch 27 seconds and hits the bar straight away.#WOLMUN pic.twitter.com/s4L4ZeSOd8

The game will now be replayed at Old Trafford – another game is the last thing this squad needs.