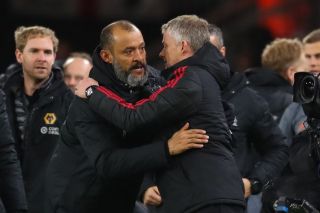 That’s what everyone will be asking now that he has passed comment on the striker, after Manchester United’s scoreless draw with Wolves in the FA Cup.

The Norwegian should know that by making these comments more will be written about Jimenez potentially joining United with the transfer window being open.

He had just watched his side draw 0-0 with Wolves tonight and the lack of goals was never going to dampen the speculation linking Jimenez with a move to Old Trafford.

As reported by Birminghamlive, Solskjaer made the following comment about the Mexican goal hunter: “Another good player that we’re being linked with.”

BBC reporter Simon Stone also tweeted about Solskjaer’s comments after the match and included more of the manager’s quoted, as seen below:

OGS on Jimenez: “Another good player we have been linked with. He did really well today. I can’t comment on speculation.”

There had been nothing reported before the match that would suggest Jimenez is close to joining United, but it’s interesting to hear Ole admit he played well against United.

It’s easy to see Jimenez would make a positive difference to United’s attack – but we need to ask if he’s the best option potentially available to us?

Wolves boss Nuno Espirito Santa said he knew nothing about the links.