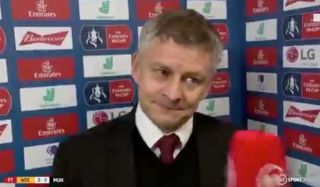 Harry Maguire’s injury status is unknown ahead of the Manchester derby.

Maguire appeared to sustain a problem during Man Utd’s 0-0 draw with Wolves in the FA Cup third round. He still completed 90 minutes at Molineux, but that’s not necessarily a good thing if it puts him out of action.

When asked after the match about how the centre-back was feeling, Ole Gunnar Solskjaer sounded uncertain about Maguire’s availability for the upcoming match.

Solskjaer spoke to BT Sport, cited by Richard Fay of the Manchester Evening News, saying: “I don’t know. We were close to taking him off at half-time, but he battled through, and let’s see how he recovers. We hope so.”

“An even game, I think a draw is a fair result.”

“I thought Tahith Chong was fantastic tonight, he caused loads of problems.”

Ole Solskjaer singled out one youngster for praise after a 0-0 draw away to Wolves.@DesKellyBTS #EmiratesFACup pic.twitter.com/WGOwyziK8N

After playing so poorly against Arsenal on New Years Day, Maguire put in a good shift tonight as United kept a clean sheet. The 26-year-old remained composed despite picking up a knock.

Phil Jones was on the bench tonight and it would concern a lot of Reds if this injury meant he started against City in the midweek fixture.

Maguire was rated just three out of 10 by Samuel Luckhurst of the Manchester Evening News for giving away ‘imbecilic fouls’.