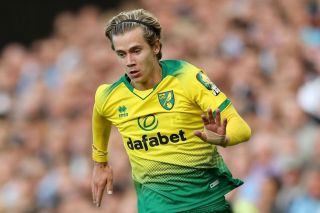 Manchester United are considering a move for Norwich City starlet Todd Cantwell, according to the Daily Mail.

Cantwell enjoyed an impressive season having adapted to the Premier League quickly, scoring six goals to date. He was not involved when Man Utd beat the Canaries 3-1 back in October, but Tottenham Hotspur are another Premier League club said to be tracking the 21-year-old midfielder.

The Mail claims United have added Cantwell to their summer shortlist as Ole Gunnar Solskjaer plans ahead for next season. The report goes on to say that United have competition from Man City and Spurs for his signature.

Cantwell, who is said to be valued at £30m by Norwich, is a midfielder with a creative mindset, so this could be a cheaper option than signing Leicester City’s James Maddison or Aston Villa’s Jack Grealish.

The Red Devils desperately need an upgrade on Jesse Lingard and Juan Mata.

If United can clinch a top four finish this season, Champions League football could be enough to convince the youngster to join Old Trafford over other potential destinations.

We’ll be keeping a closer eye on Cantwell for the remainder of the season.