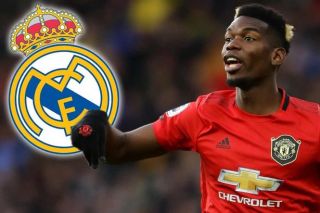 Real Madrid are prepared to offer cash and Toni Kroos in a deal to sign Paul Pogba, according to The Sun.

It’s not yet clear how much cash would be involved with the deal, but the report claims Ole Gunnar Solskjaer would be keen on the Germany international.

Of course he would! Pogba wouldn’t lace Kroos’ boots and the French midfielder has been missing for three months this season with an ankle injury.

A deal of this sort is unlikely to happen in January. Kroos will be hoping to go all the way in the Champions League with Real Madrid, while United will try to squeeze the last drop out of Pogba if he ever returns from injury.

Although he hasn’t played much this season — eight appearances so far — the circus that surrounds Pogba doesn’t help anyone. His agent Mino Raiola is a constant distraction and Solskjaer shouldn’t need to respond to that prat in the lead-up to an FA Cup clash.

There has been too much negativity on the Pogba trail this season. The sooner it’s stopped and our players want to be playing games the better.

Former Take That singer Robbie Williams may get his wish after all.