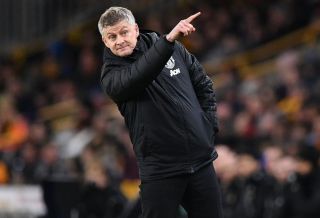 According to Opta, Manchester United have broken an unwanted feat for the first time in five years after a disappointing performance against Wolves in the FA Cup.

The Red Devils failed to direct a single shot on target for the first time in a domestic league or cup game since playing Southampton in the Premier League in January 2015.

You could say the lads have heavy legs after a busy festive period, but some of the players on show today don’t play every game and are considered fringe players. You’d expect them to take an opportunity like one in the FA Cup but no, they failed to give the manager a selection headache ahead of Tuesday night’s League Cup semi-final against Man City.

The stat may seem harsh if you think Marcus Rashford’s effort on goal after coming on should count as one on target, but it was deflected on to the bar by Wolves defender Conor Coady.

0 – Manchester United failed to direct a single shot on target in a domestic league or cup game for the first time since January 2015 vs Southampton in the Premier League. Barren. #FACup pic.twitter.com/E8HFv2RWNg

Regardless, today’s performance was shameful and the 0-0 draw shows the game for what it was… a dull affair apart from some of the opportunities Wolves had on goal.

Questions need to be asked of Solskjaer on why United keep struggling to break teams down.

It makes us vulnerable against lesser sides and explains why we’ve been so inconsistent this season.