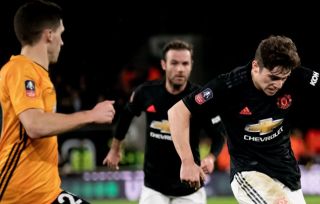 Right, we’re still in the FA Cup draw but we could really do without another 90 minutes of that…

Wolves were the better side today as Ole Gunnar Solskjaer had to deal with an injury and illness hit squad.

Manchester United had a penalty shout in the first half that should have been given, but VAR didn’t even intervene.

Marcus Rashford called for a penalty after he came on as a second half substitute. This time the referee got it right by waving play on.

Man Utd have a lot of work to do and haven’t even got a playing identity under Solskjaer as of yet. The football we’re now seeing most weeks still isn’t good enough and questions are bound to be asked of the manager if it continues.

Crashing out of the FA Cup today would have been a disaster. We should be doing our utmost to ensure we go on a cup run this season given how inconsistent we’ve been in the Premier League.

Read the tweets below to see how United fans reacted to the 0-0 draw at Wolves.

Toothless Utd, disappointing to see a Utd playing like a lower league team trying to scrape a cup replay but relieved to at least still be in the competition in a game I didn’t have high hopes for. Zero shots on target is a horrendous stat.

Bad news – we have to sit through another 90 minutes of that shit again. #WOLMUN

I hate replays more than the International Break

FT: Wolves 0-0 United. A replay will be needed to decide who goes through to the next round. Not a single shot on target for United tonight. A poor game overall and an extra match we could’ve done without.

98 minutes of football played. Not a single shot on target.

Just let that sink in for a minute.

MUFC played nine games in Dec. They’ll play nine in Jan too if they beat Wolves in replay…before playing Wolves again in the league on Feb 1st. Six games v Wolves in 10 months. No wins so far.

Terrible from United. Zero quality in the final third. Slight injection after Rashford and Fred were introduced. Unwanted extra fixture for both teams.

Creditable draw for #mufc. Just three of the starters started against Wolves in second game of the season and five or six first-teamers were absent altogether tonight. Finally a positive(ish) result at Wolves.

Not a great performance from #MUFC. Denied a clear penalty but to finish without a shot in target is probably a fair reflection of the performance.

Awful game of football from a rotated Wolves and Manchester United side. Further evidence for scrapping the replays rule completely, makes for negative football, especially when lower league teams play at home. Unwanted extra fixture for both teams.