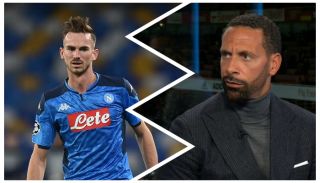 Rio Ferdinand ran a Q&A on Twitter this morning after inviting his followers to flood his mentions with questions.

The former Manchester United captain was en route back to London after covering Thursday night’s Premier League encounter between Liverpool and Sheffield United at Anfield.

One of the first questions to be answered had relevance to the January transfer window.

Rio was asked if United could sign two players, who would he like to see recruited at Old Trafford?

The former England international turned pundit responded with a central midfielder and a centre-back — Fabián Ruiz and Kalidou Koulibaly of Napoli.

This provides some insight into what the former United defender thinks the current side lacks.

We need more creativity and grit in midfield but the performance against Arsenal also showed our defenders in a negative light.

Harry Maguire had one of his worst displays for the club and Victor Lindelof wasn’t any better.

Maybe we can bring Rio back for the rest of the season? It’s not as if the Glazers are going to pay for Koulibaly in January — even if he was available.

Just thinking…. I would 100% go & get @ECavaniOfficial (Edinson Cavani).

Huge experience, Goalscorer, Work Ethic & Great Pro who the younger players in the squad would learn a lot from! Thoughts?!#AskRio https://t.co/bG2KXAYSUf