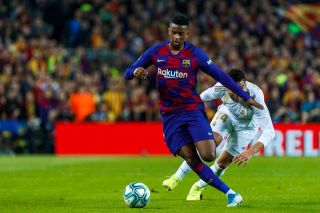 A report from Spanish publication Sport suggests that Nelson Semedo has been a Manchester United target for some time — and the Red Devils could finally make a move for him now that he’s available.

It looked like he was an important member of the Barcelona team at the beginning of the season, but that no longer appears to be the case.

Manager Ole Gunnar Solskjaer needs to strengthen in several departments to get the team he wants, but after signing Aaron Wan-Bissaka it would be crazy to look at another player for the same role.

Wan-Bissaka started the season strongly but has been less influential at right-back over the past month or so. That’s not a criticism of the former Crystal Palace defender, who looks destined to be part of United’s defence for a long time.

Solskjaer has every reason to be satisfied with Wan-Bissaka, too. He’s potentially one of the best in the Premier League as it is and these links to Semedo are questionable at best.

The versatile Barça full-back can also play on the left flank, so it could be Luke Shaw who will be looking over his shoulders.

It is alleged in the report, cited by Sport Witness, that the player’s representative Jorge Mendes could push a deal given his strong connections at Old Trafford.

That we would understand. Brandon Williams, 19, has only come into the first team and is already Solskjaer’s best option at left-back.

These claims look like they’re based on Semedo being available for transfer. Not that United are knocking on Barcelona’s door.

Taken with a pinch of salt.