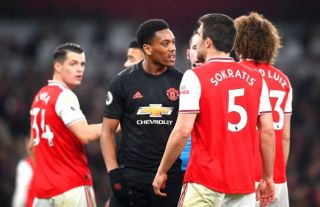 Ole Gunnar Solskjaer has been dealt a blow ahead of Manchester United’s FA Cup third round clash against Wolves on Saturday.

News has emerged that Anthony Martial and Jesse Lingard were both sent home from Carrington this morning because they are suffering with cold symptoms.

It is cold and flu season after all. I know because I’ve been fighting the flu all week and spent two days bed ridden!

Lingard and Martial have been sent home from Carrington this morning because they are ill. Solskjaer said at his press conference a few of the squad are suffering with cold symptoms.

Wolves will give United a good go on Saturday — regardless of what absentees Solskjaer has to deal with — so being without two more attacking players, along with Paul Pogba, is not good news for the Norwegian coach.

The Red Devils have to travel to Molineux for a 5.30 kick-off which promises to be a close encounter.

As per Dawson, Solskjaer has already confirmed that Sergio Romero will start between the posts.

Solskjaer without Pogba, McTominay and Tuanzebe against Wolves tomorrow and also said a few others are ill. “I’ll have to see who wakes up tomorrow and feels OK.” Sergio Romero starting in goal.

We could do without anymore players pulling out between now and Saturday.