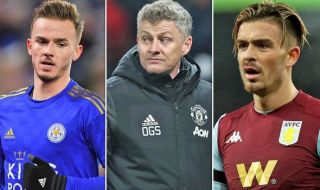 It is noted that Solskjaer had wanted an attacking midfielder for the summer anyway, but there is a realisation that has become even more pressing with United needing to do something about their situation as soon as possible.

There’s a lack of creativity in the middle which is hurting the side’s overall performance. There’s the injury to Scott McTominay which could see him out of action for up to two months. Then there’s the ongoing issues with Paul Pogba which he doesn’t seem to want to offer any clarity over…

The nature of the display against Arsenal was disappointing too. How can the team lose in such a way after a degree of momentum over the Christmas period?

We’re like a light switch these days — easy to turn on and off.

Grealish and Maddison are both having good seasons — both scoring goals at the weekend — and they’d be a massive upgrade on what Solskjaer currently has available to him.

The Independent claims United may again investigate the availability of Christian Eriksen, but the Dane’s preference is to go abroad, presumably to Spain.