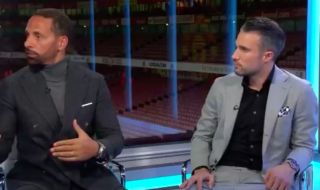 We all know just how ruthless Sir Alex Ferguson was as Manchester United manager.

Ferguson’s uncharitable nature is one of the reasons he is still the greatest manager of all time, and a failure to do what he asked would not have been accepted lightly.

It was fascinating to hear the extent of Ferguson’s ruthlessness from two of his former players Rio Ferdinand and Robin Van Persie this evening.

The pair were discussing the importance of giving the United’s attackers the ball to create chances after the abject 2-0 defeat to Arsenal this evening.

They revealed Ferguson threatened to drop senior first team stars such as Paul Scholes and Michael Carrick if they did not feed Van Persie in his fine title winning season.

Perhaps Ole Gunnar Solskjaer could use some of Ferguson’s ruthlessness in his approach as United have had too many consistently poor performers in recent months.

Listen to the discussion below, courtesy of BT Sport:

"He hammered Carrick, Scholesy, others! He said Robin will win us the league if we pass him the ball."

"He literally said to them, 'if you cannot find him, you will NOT play!'" 😳