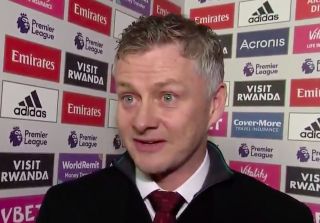 The big headline to come from the Manchester United team news ahead of this evening’s clash against Arsenal at the Emirates Stadium is the absence of Paul Pogba.

Pogba has been left out of the United squad entirely, despite Solskjaer suggesting he was fit and available to play in tonight’s game.

But according to the United boss, the Frenchman has been ruled out for a further ‘few weeks’ with a recurring ankle problem.

READ MORE:  Loads of Man Utd fans react as Paul Pogba is left out of squad to face Arsenal

Many United fans on social media have not been convinced with Solskjaer’s reasons for Pogba’s omission, with many feeling that the fact he has not been selected in the match day squad means he could be leaving Old Trafford this month.

It’s certainly frustrating that United’s best midfielder is now out again after making impacts from the bench against Newcastle and Watford recently.

Fred and Nemanja Matic retain their places in a midfield pivot, with Scott McTominay also sidelined with a knee injury.

See what Solskjaer had to say about Pogba below:

Bringing in fresh legs 🏃‍♂️
A word on @JesseLingard ✊@PaulPogba injury update 🔴#MUTV caught up with Ole ahead of #ARSMUN…#MUFC pic.twitter.com/TXH6rq1rMM