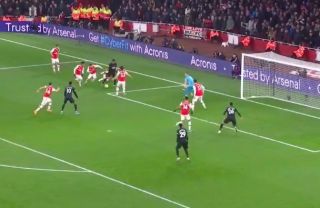 Anthony Martial nearly hauled Manchester United back into the game with a brilliant piece of individual skill against Arsenal at the Emirates.

The Reds currently trail 2-0, and deservedly so after an abject at best first-half performance.

United have upped their intensity in the second-half, but as of yet have been unable to find a way back into the match.

Martial nearly produced the piece of magic United needed, beating Sokratis, Maitland-Niles and Lucas Torreira on a dribble. But the ball could not quite find its way to Marcus Rashford who eventually blazed over and the chance was gone.

As it stands United are set to miss out on another great opportunity to close the gap on the top four with defeat against Mikel Arteta’s side.