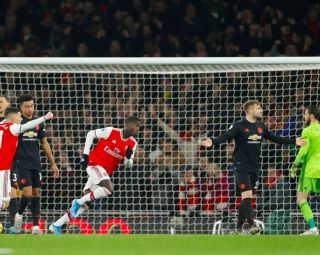 Manchester United’s abject first-half performance against Arsenal means they are deservedly 2-0 down at the Emirates.

The Reds have shown no intensity to get stuck in against Mikel Arteta’s men, who rather embarrassingly for United, simply seem to have more desire to win the ball.

Nicolas Pepe opened the scoring for the home side following some poor United defending. Sokratis then doubled the Gunners’ lead with the Reds failing to clear from a corner.

United have reverted back to type in this half after two impressive victories over Newcastle and Burnley. Ole Gunnar Solskjaer has to change something and the Reds need to step up and take some responsibility in the second-half if they are to save the game.

Two players in particular that have come under criticism so far are Luke Shaw and Jesse Lingard. Shaw has had a horrendous time at left-back, constantly being beaten by opposite man Pepe who is causing all sorts of problems.

Lingard has also been wasteful in possession, providing United no outlet in attack.

In truth, there are poor performances all over the pitch and a vast improvement is a necessity in the second-half.

Performances like that half are why Ole needs to be scrutinised. What the fuck does he see in Shaw & Lingard for big games? Maguire also needs that captains armband taken off him. No way he’s earned that with his performances so far this season.

Lingard awful but this game not down to him. Shaw can’t run and matic can’t move. Ole tactics a complete disgrace leaving kolasinac wide open in space every attack

Wonder why he’s not mentioned Shaw, Lingard or the most expensive CB in the world. https://t.co/QwvwhsFWBh

Lindelof and Shaw not good enough defenders for a big six club and jury still out on Maguire. That’s why United won’t finish in the top four.