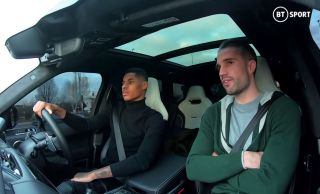 Marcus Rashford says that the words of a former Manchester United manager helped him to adjust to life in the first team as a teenager.

The Man Utd forward came through the club’s youth academy before joining the senior squad in 2015, with thanks to Louis van Gaal.

Rashford made his debut in 2016, endearing himself to fans instantly, as he scored two goals against Midtjylland in the Europa League.

His first Premier League appearances saw him score another brace in a 3-2 win against Arsenal.

The England international has since gone on to establish himself as a key player for United and Gareth Southgate’s side.

Rashford has now revealed that Van Gaal helped to make him smile every day, speaking to fromer United striker Robin van Persie for BT Sport: “The time with Louis was very good for me. He and Ryan Giggs helped me a lot. Because that transition for the reserves to the first team can be hard — I hadn’t played much reserve football.

“I was on the bench for the first team before I had even started for the reserves. Van Gaal was top.

“At the time I was getting a lot of praise and attention from everywhere outside but the biggest thing for me were his words.

“That was what was making me smile every day. To be part of Man United’s first team. There was some games when it was difficult.

“I remember a game — Tottenham away — when he took me off at half-time. The next day we spoke honestly — I was still smiling.”

When you speak to Reds about Van Gaal the reactions can be mixed. Most probably reflect on the Dutchman as United manager with a more negative spin. His football was boring to say the least, but this is a man who has developed some of the best players we’ve seen over the last decade.

Maybe it was a matter of joining the wrong club and the wrong time. United were run terribly throughout his reign, as we are to this day, and Stretty News understood at the time that a number of players found his methods boring.