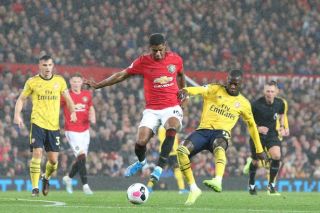 Manchester United travel to the Emirates tonight hoping to make it three successive wins in the Premier League.

Arsenal have been in awful form. Even the appointment of Mikel Arteta hasn’t been enough to get a win over the Christmas holidays but all of that will be forgotten if the Gunners can beat Man Utd tonight.

After wins over Newcastle and Burnley, United should go into this game with a spring in their step but let’s not mistake that for complacency.

Too many times this season we’ve let our foot off the gas and dropped points in winnable games. Tonight we need to put Arsenal to the knife and show we’re serious about clinching that fourth spot which is currently occupied by Chelsea, who beat the Gunners 2-1 last week.

To make matters worse for the London outfit, Arsenal are without a win in their last five games.

The match starts at 8pm on New Years Day at the Emirates Stadium.

Can the match be streamed?

As long as you have a subscription, the match will be shown on the BT Sport app for smartphones, tablets or laptops.