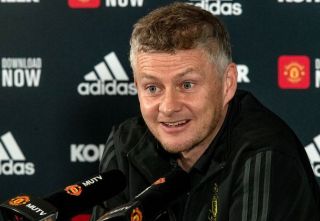 Ole Gunnar Solskjaer has reiterated he has full support of the Manchester United board to make signings ahead of the opening of the January transfer window.

United head into the mid-season window in need of recruitments, despite a recent upturn in results that has seen Solskjaer’s side reach fifth in the league table.

A midfielder should be prioritised with United not yet replacing Ander Herrera. Scott McTominay’s injury accentuates the need to strengthen in the area with the midfield looking significantly weaker in his absence.

The impressive performances against Burnley from Nemanja Matic and Fred should not deter the need to do business next month.

After missing out on Erling Haaland, the Reds also need to sign an attacker to provide competition for places. While Anthony Martial and Marcus Rashford have been in good form of late, Solskjaer requires a genuine striker to replace Romelu Lukaku.

Speaking in his embargoed press conference after the Burnley victory, Solskjaer said he does have the backing from the board, but emphasised that it has to be the right player for a move to happen.

United have recruited poorly in recent years and Solskjaer is keen to get it right with summer arrivals Dan James, Harry Maguire and Aaron-Wan-Bissaka all having a good impact on the first-team.

Solskjaer addressed the January transfer window in his embargoed press conference after the Burnley game at Turf Moor.

“I’m always an optimist,” he said as quoted by the Telegraph.

“I’m a striker by nature and I’ve always been an optimist. I’m optimistic we can keep players fit and, if the right ones become available, we do have the resources and I do have the backing from the board, but it’s also about getting the right ones.