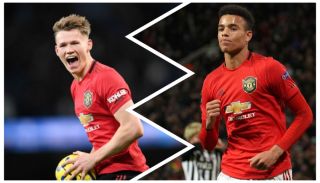 Having now played 20 of the 38 Premier League matches this season, the half-time whistle has been blown on Manchester United’s thus far tumultuous 2019-20 campaign. Ole Gunnar Solskjaer’s first full season as manager has brought many ups and downs, which have translated to improved overall football and a younger squad, but also a frustrating inability to secure points on the pitch.

At the halfway point of the season, we can analyse the squad and detail where some of United’s strengths and weaknesses lie. Below is a ranking of all United players to have played in at least a quarter of United’s 28 matches so far this season.

One of the better defensive midfielders at United when he signed, Matic is now almost indisputably the worst. His mobility and defensive capabilities seem to have declined at 31, and now in the final year of his contract at United, it would be a massive surprise to see him renew.

In the last few years, Mata has become a shadow of the player that he was in his prime, losing the incisive playmaking ability and threat on the ball that once defined him. His brilliant technical abilities and tactical intelligence remain, but he is too poorly suited to any role in Solskjaer’s preferred setup to assert his influence on matches.

Pereira has seemingly been Solskjaer’s first choice in attacking midfield by default, due to his tactical suitability for the role. This may preserve his time at United, but if the player wants to last beyond 2021, he will need to show more than the occasional gritty display or magical set-piece.

Lingard’s gruesome campaign has led to just one goal and assist thus far (Transfermarkt). Fortunately, at his best, he has orchestrated enough counterattacks to be effective for United in some big matches. The 27-year-old will be hoping to return to his 2017-18 form in the new year.

Likely United’s fifth-choice fullback, injuries once again have forced Young to play in far more matches than he is capable of. It is difficult to criticize a player that is so clearly out of his depth, especially when Young is often effective at stepping in and playing his heart out for the club.

Allowing Rojo to play in a more assured United defence yielded more glimpses of the quality that the Argentine has. His season was then unsurprisingly derailed by fitness concerns, leading to questions as to whether he will last another year at the club if his fitness does not improve.

Yet another season is passing Shaw by, with the same questions as usual being asked of the formerly prodigious young fullback. He so often falls one step short of a crucial defensive or attacking contribution. While not being anywhere near as poor as he is often made out to be, Shaw seems to be set for a make-or-break second half of the season.

For a debutant aged 19, Brandon Williams has had an excellent introduction to first-team football, proving that he can not only be an option for the future, but also the present. Despite struggling with inexperience on a few occasions, the United academy product has shown tenacity and drive from left-back. He even added an excellent and important goal against Sheffield United.

In his first full season of football for United’s first team, Tuanzebe has established himself as the clear third option at centre-back. His calmness and composure on the ball gives Solskjaer an alternative to Victor Lindelof, and while he has some way to go before being as good a defender as the Swedish international, Tuanzebe has afforded himself at least another few seasons to develop in United’s senior team.

Quite truly United’s 12th man, Sergio Romero is always worthy of appreciation. His professionalism while playing as the clear second-string goalkeeper for the club is admirable, while his record of 31 clean sheets in 50 matches for United is truly impressive.

The polarizing Pogba falls just short of the Top 10, largely due to his injury record. Despite being far from his best early in the season, Pogba’s importance to United’s build-up play was clear. It became even clearer after watching a clueless attacking side in his absence. Should the World Cup winner maintain fitness in 2020, he will likely be among United’s top players by the end of the campaign.

A very strange campaign thus far for Fred has also shown marked improvements in the 26-year-old’s game. At his best, he looks an imposing tactical threat with his ability to press and unsettle opposition midfielders, but he still quite often looks like a deer in the headlights with the ball at his feet. He has ultimately shown enough promise and commitment to warrant patience from Solskjaer.

After turning heads with his commanding displays at the back last season, Lindelof has not quite followed up, often still struggling with the physicality of Premier League strikers. However, the 25-year-old has still been effective and shown that he should be a long-term option at the back for United.

An electrifying start to the campaign from James has somewhat fizzled out in recent weeks, with the forward battling the transition to the Premier League, the lack of creativity in United’s midfield, and playing out of position on the right-wing. All said and done, James has done very well to post 3 goals and 6 assists, as per Transfermarkt, in what is only the first half of his first season of top-flight football.

While he has been far from perfect and occasionally invited heavy scrutiny for his performances, De Gea remains one of United’s most important players and has helped Solskjaer through some sticky situations with his shot-stopping. The 29-year-old has not shown the form that saw him once widely regarded as the best goalkeeper in the world, but he remains one of England’s elite shot-stoppers.

Everyone knew that Greenwood would have an impact, but not even his most optimistic of supporters would have envisioned this kind of breakthrough. Now, the 18-year-old striker looks destined to hit double figures this season despite playing from the right-wing. His attacking exploits have allowed rest for United’s most important forwards while drawing comparisons to Robin van Persie along the way.

Quietly putting together the best season of his career thus far, Anthony Martial would likely be in the top three had he not spent two months on the sidelines. United’s forwards, particularly Marcus Rashford, sorely missed Martial’s excellent positioning and link-up play during his time on the sidelines. The player looks at home in the striker slot and a just few steps short of a world class operator.

Martial has scored more Premier League goals (41) and had more goal involvements (61) than any other #ManUtd player since his debut in September 2015. pic.twitter.com/M88WN5gAyz

Maguire’s gigantic transfer fee has somehow led to the assertion that he has not made much of an impact at United, which could not be further from the case. Starting more matches for the club than any other player this season, Maguire’s commanding displays have improved the defence overall, enhanced United’s build-up play, and earned himself the armband on a few occasions.

There were signs that McTominay could be a valuable squad player for United over recent seasons, but now, he seems to be a nailed-on starter for Solskjaer. The player’s tactical intelligence, positive decision-making and occasional contribution in front of goal have made him one of the Premier League’s better midfielders, and at the tender age of 23, he can only improve more.

If Rashford goes on to double his tally and hit 30 goals this season, he will have posted the best numerical season from a United forward post-Ferguson. The academy graduate’s patchy start to the season led many to believe his growth was reaching a plateau, but a resurgence in United’s attacking tactics led to an imperious and ongoing stretch of form that represents the best of Rashford’s career.

Wan-Bissaka has saved United’s defence and midfield countless times and performed almost universally well this season. Adding a few massive displays in the highest-profile fixtures allows the new recruit to edge out Rashford for the top spot. Already one of the best on the planet at what he does, he could improve United even further by adding more crosses in the mould of his assist for Rashford’s header against Newcastle.