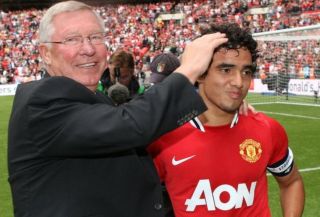 Rafael Da Silva is one of our favourite Manchester United players of the last decade.

We did an exclusive interview with the Lyon star earlier this year and he was great fun. The enthusiasm he has for the club isn’t too different to any of us.

And, Sir Alex Ferguson… He has utmost respect for the former United manager who brought him to the club as a teenager, along with his twin brother Fabio.

With today being Ferguson’s 78th birthday loads of people are wishing the Scot well on social media.

Rafael has done the same with one of their best photos together, as seen below:

Happy birthday boss hope you enjoy your day and I will never get tired to say thank you for everything. ❤️❤️ pic.twitter.com/CJGt4XOWOD

Unfortunately, Rafael’s stay at United was cut short by Louis van Gaal. The Dutchman sold him and United were left short in the right-back department for years.

Only now with the arrival of Aaron Wan-Bissaka are we covered at right-back.