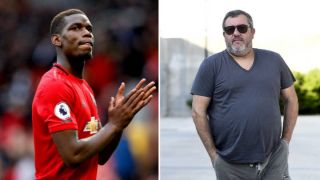 The Italian confirms they’re happy to stay at Man Utd beyond January but has insisted they must be competing for trophies next year.

And that’s nothing to be offended over, even if you find Raiola to be a bit of a plank, because that’s what we all want. To see United competing on all fronts.

As noted by The Guardian, Ole Gunnar Solskjaer was keen to stress earlier this month that Pogba would be going nowhere in January.

The France international has missed most of the season with a troublesome ankle injury sidelining him for three months, yet he remains a pivotal figure in the United squad and one we can’t way to have back to full match fitness.

Of course, Solskjaer is going to be reluctant to see his best player leave midway through the season, and now Raiola has seemingly confirmed that transfer plan in terms of staying put beyond the upcoming transfer window.

“Paul is struggling a little bit with his injury and that’s our main interest now. There’s one objective that Paul has and that is to perform as well as possible with Manchester United.

“He’s a top pro and I think that his heart is in the right place with Manchester United.”

Then asked whether he could see Pogba still being at United in a year’s time, Raiola said: “Yes I can, but in a club that I hope fights for the league and hopefully the Champions League.

“Is that strange? Am I the only one that’s worried? Is the owner not worried? I think that everybody that is in love with Manchester United is worried about that.

“I’m worried about that for my player. I’m not a fan of Manchester United but I have a very direct interest.

“Like Ole’s saying, it’s a work in progress now this club. He’s says he’s working on a team for next year. Let’s hope that it goes well for him because the world needs Manchester United on the top.

“Clearly they are not where they think they should be.”