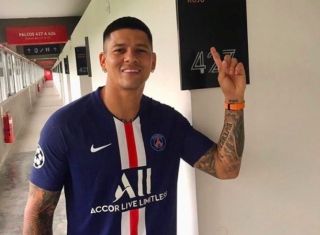 Manchester United defender Marcos Rojo has bizarrely been photographed wearing a Paris Saint-Germain shirt during a trip to homeland Argentina.

Rojo wore the shirt when visiting his boyhood club Estudiantes on a recent trip, and was snapped several times in the jersey of the French Champions.

While we don’t think there’s anything in this in terms of a potential transfer to PSG, it’s a strange choice of shirt for the Argentina international to wear.

Rojo has struggled for first-team football this season under Ole Gunnar Solskjaer, after it had appeared inevitable he would leave Old Trafford in the summer.

He has defended adequately in the nine appearances he has made across all competitions this season, but he is already behind Harry Maguire, Victor Lindelof, Axel Tuanzebe and perhaps even Phil Jones in the United pecking order.

Manchester Evening News report that Rojo was allowed time off to spend Christmas in Argentina, and it now appears likely that he will leave Old Trafford in the January transfer window.

See photos of Rojo in a PSG shirt below, courtesy of Estudiantes: