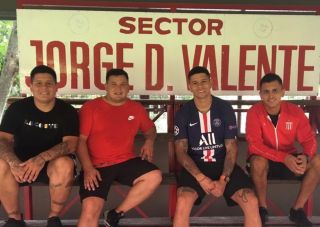 The truth is nobody knows what’s going on with Marcos Rojo.

Since the summer there’s been speculation over the Argentina international moving on to pastures new and the Manchester Evening News claims he has been granted time off by Manchester United ahead of a potential January exit.

The 29-year-old has not featured for Man Utd since October after sustaining a muscle injury, although he returned to first team training two weeks ago.

Eric Bailly has just returned to training after five months out and it looks like the Ivorian will be ahead of Rojo in the defensive pecking order immeditely.

But photos emerged from Rojo’s trip back to Argentina with the United defender wearing a PSG shirt.

According to the Daily Mail, Rojo earns £160,000 per week at Old Trafford, so you can’t blame United for wanting to get him off their wage bill.

United fans have been reacting to the photos of Rojo wearing a PSG shirt. Check out their replies below:

That seems too good to be true!

God i hope so

Get him off the pay roll, who gives a fuck where he goes?

How on earth are we letting Marcos Rojo leave united before Phil Jones? Sick to my core, absolutely unreal servant to the club pic.twitter.com/R0bWVxZxQX

It looks like Rojo is on his way to PSG.

That means he has officially completed his Manchester United career without a single red card.

Neymar seeing Rojo has joined PSG and knowing he is gonna have a legitimate reason he’s injured on his sister’s birthday. #MUFC pic.twitter.com/n3piFDWDMX

Marcos Rojo is going to be training with Neymar everyday. He’ll fucking kill him pic.twitter.com/NnYPdnmGvt

Rojo to PSG WTF good luck to him proper entertaining player sometimes and proper reckless. Anyway been decent when called upon but too injury prone, hope he smashes it in Paris. ARGENTINA 🇦🇷 pic.twitter.com/fapI1wzMj2

We got rid of Rojo before Jones uno. State pic.twitter.com/GIYRWBmGmg