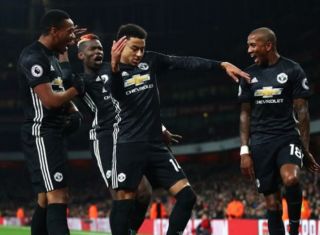 Next up is a trip to the Emirates to face a struggling Arsenal side. Lingard is looking to start 2020 with a win.

“We take a lot of belief [from those wins] and the confidence is flowing at the moment,” Lingard told the official Manchester United website.

“Away games are always tough and you get your hostile atmospheres, but we’re used to that and as long as we stick to our gameplan and our tactics, then hopefully we can win the game. Confidence and focus is very important.

“We’ve done it most times when we’ve played them away, so that will hopefully be one of our strong points.”

Lingard isn’t the most popular football among Arsenal’s fanbase, as you can seen from the tweet below:

Lingard scored 3 very ordinary goals at the Emirates and United fans have been prolonging this dead joke about dance floors for almost 2 years. Pls stfu, lingard is trash and I would take 3-4 arsenal players over him any day

It would be great to see him start and score against the Gunners again — as a typical piss boiling exercise.

Seen a few Arsenal fans bantering us today and i just want to send a quick reminder that the last time your club won the league, Jesse Lingard was playing for Manchester United U10s.

Since then, he has made Emirates his dance floor. pic.twitter.com/3RSVeQW16t

Lingard has urged his teammates to focus on their own game against Arsenal.

“It can be difficult if you don’t know the style of play [when a new manager comes in],” he added. “But we’ll be well prepared and it’s about focus and concentration and keeping that consistency in every game, and having the same mentality.”

A win for United would push Arsenal down closer to the relegation zone. The Gunners have a number of injuries to deal with at the moment, but their situation is a lot worse than ours.

A win for United would push Arsenal down closer to the relegation zone. The Gunners have a number of injuries to deal with at the moment, but their situation is a lot worse than ours.

You get the feeling Lingard enjoys playing against Arsenal more than most sides in the Premier League. After all, he’s scored more times against the Gunners (4) than any other opponent.

“I’ve got good memories from some goals there. But I9 always take more joy out of winning the game with the team and taking the three points. Any away game against a top team is an important one.”

Let’s hope it’s another three points to start the new year on a positive note.