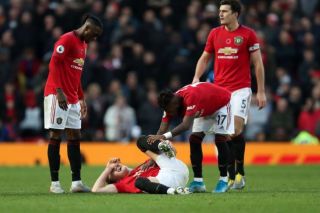 Manchester United could be dealt a major blow as there are concerns over how long Scott McTominay could be out injured.

The 23-year-old has become a hugely influential player under Ole Gunnar Solskjaer this season, making 21 appearances across all competitions while registering three goals and one assist.

Maturity comes with experience and that’s exactly what the Scotland International has shown this term, particularly when he had to stand up as Paul Pogba spent three months out with a troublesome ankle injury.

As noted by Sky Sports, Solskjaer himself suggested that McTominay could be out for around four weeks, but the latest update now suggests it could be double that, as per the Irish Mirror.

That’s a huge blow and Pogba has yet to reach full match fitness and missing the 2-0 win over Burnley last Saturday.

The club has yet to give an official update but it doesn’t sound good for McTominay, who picked up his injury against Newcastle United on Boxing Day.

Man Utd travel to the Emirates on New Years Day and even though Arsenal are struggling this season — worse than us — McTominay is going to be a huge loss in midfield.