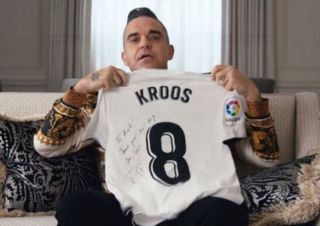 The former Take That singer featured in Kroos’ documentary and has pleaded with the 29-year-old, who has long been linked with a move to Old Trafford, to quit Spain for the Premier League giants.

“You’ve won everything in Madrid, I’m asking you to sign for Manchester United,” Williams said in Kroos’ documentary, as quoted by Madrid based newspaper Marca.

“I think we have the best league in the world, the Premier League. That’s why one thing annoys me a lot.

“Real Madrid have made me feel small, as if I had a small penis.

“Football is my religion and I don’t like that there are gods bigger than mine.”

The documentary reveals numerous details about Kroos’ life on and off the pitch.

From cleaning his own boots to his relationship with his wife and the Real Madrid dressing room.

An interesting anecdote is Kroos has the same nickname as Man Utd centre-back Victor Lindelof in the Real Madrid dressing room, where he is called ‘Iceman’.

However, Williams is a known Port Vale support, so it’s unknown why he wants Kroos to join United over other English clubs.

The Germany international was strongly linked with a move to United in 2014.

He previously told lifePR, as per the Daily Mirror: “I knew before that Manchester wanted me.

“And Moyes underlined that absolutely. It was a really nice afternoon with very nice people. We talked a lot about United’s footballing plan which convinced me.

“In the end, we agreed to do it. We agreed verbally. I am not somebody who worries about contingencies. Yes, it was close.

“I almost went to Manchester United. But it did not happen that way.”

United’s midfield would look very different today had we signed Kroos. It would be the sort of pivot that would get the most out of Paul Pogba, instead of Fred or Andreas Pereira.

Unfortunately we missed out on Kroos and he left Bayern Munich for Real Madrid and is still running their midfield alongside the excellent Luka Modric.