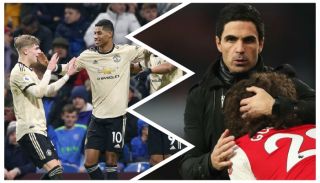 Manchester United will be looking to make it three successive Premier League wins when they travel to the Emirates to face Arsenal on Wednesday night.

The Red Devils take on one of their fiercest rivals off the back of a 2-0 win over Burnley at Turf Moor.

Having collected just 31 points from 20 Premier League matches this season, United shouldn’t be in a top-four race at this stage of the campaign, but Chelsea sit just four points clear in fourth place.

That alone shows you how inconsistent the teams fighting for the last Champions League spot are. Hopefully the new year sees United go on a long run, like what we witnessed under Ole Gunnar Solskjaer as caretaker manager.

Consistency has been a real problem this term, which was always going to be the case with Solskjaer persisting with such a young squad.

But things are a lot worse at Arsenal.

Unai Emery got the sack last month and has been replaced by ex-Gunner Mikel Arteta.

The Spaniard, renowned for his coaching skills under Pep Guardiola at Man City, has a lot of work on his hands which isn’t too different from Solskjaer.

Areta’s start to life as a manager hasn’t been what he would have wished for. A 1-1 draw with Bournemouth and 2-1 defeat against rivals Chelsea, who came from behind, showed clear signs of a squad that needs investment.

Arsenal sit 12th with just 24 points and defeat on Wednesday night should see them ruled out of the race for a top-four finish. In fact, they’ll be closer to the relegation zone which is remarkable this far into the season.

The Gunners are woeful defensively and with Anthony Martial and Marcus Rashford is flying form, we’re predicting goals and a convicting win for Solskjaer’s side.