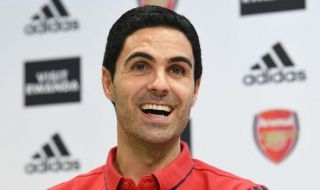 Newly appointed Arsenal manager has made a pretty ridiculous statement about the size of their club.

He claims Arsenal are the ‘biggest club in England,’ which is complete rubbish, in all honesty.

It’s just one of those comments we can’t let slip. It deserves as much attention possible because it’s downright bobbins!

See his statement below, courtesy of a graphic by GOAL:

READ MORE: Potential Man Utd XI vs Arsenal – Pogba decision, changes at the back and midfield

Arsenal, who have won 13 league titles in their history, after 7 short of Manchester United’s 20 and Liverpool’s 18.

A more accurate assessment would see Arsenal named the third biggest club in England, though recent success from Chelsea and Man City may reflect differently to the modern fan.

While I’m sat here rubbishing Arteta’s recent claim, none of us will lose sleep over it. The Spaniard has only been appointed Arsenal manager and he’s clearly trying to raise spirits at the club.

He can do that by demanding more of his players and letting them know about the history of the club. All to show them what’s to be expected.

Arsenal are currently 12th in the Premier League table, edging closer to the relegation zone than the top-four.

The Gunners host United in the league on Wednesday night.